JU At A Glance

JU at a glance 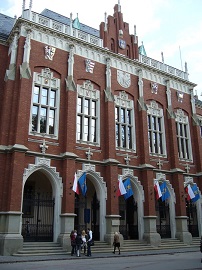 Why the Jagiellonian University?

JU Medical College (JU MC) is formed by three faculties: Faculty of Medicine – established in 1364, it is Poland’s oldest unit educating physicians; Faculty of Pharmacy; and Faculty of Health Sciences.

JU MC is an heir to the long tradition in educating highly-specialized medical personnel for the whole of the healthcare system. Its highest standards in teaching, research, and clinical activity are additionally motivated by its status of the oldest educational institution in Poland.

...and 4 campuses throughout the city

Facilities of the Faculties: International and Political Studies, Philology.

The Jagiellonian University is an active participant of many international co-operation networks, such as:

The Jagiellonian University is not only about studying and research. Follow JU Events calendar and stay tuned for all events planned for the nearest future. It is also worth your while to visit on the fascinating JU Museums.